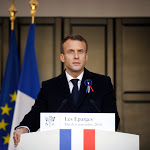 French President French President delivers a speech during a ceremony to pay tribute to French author Maurice Genevoix, in Les Epargnes, northern France, Tuesday, Nov. 6, 2018. Emmanuel Macron is on his second day of a week of commemorations for the 100th anniversary of the end of World War One, which is set to mix remembrance of the past and warnings about the present surge in nationalism around the globe. (AP Photo/Francois Mori, Pool)